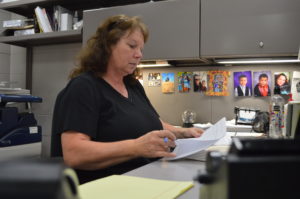 Janet Coburn is in charge of keeping the service area for MITS straight. Literally. As the maintenance secretary, her job is to purchase new building and ground supplies. She needs to keep track of all information regarding the buses, including how much fuel the buses have used, what kind of parts need to be ordered for the building, keeping up with the regulations of the Indiana Department of Environmental Management (IDEM), and doing all of the stocking. It was hard for Janet to define exactly one thing that she does because a large portion of the transportation business seems to eventually make its way to her in the maintenance office.

Janet is constantly receiving and sending out information and participating in projects around the office. She is always ready to act and hesitate to get the job done. “I find people or I do it myself,” said Janet, referring to stocking and the rest of her duties. “I don’t mind getting dirty, I just want to get it done.”

One of these recent projects was that of the new bus shelter on Madison Street. The old shelter was destroyed in the wind storm of March of this year and immediately after the accident Janet began working to help replace it with a new one. She was the one who filed a claim for windstorm damage, obtained pricing on the materials for the new building, and researched construction companies for the job. She was involved from start to finish.

Being involved in many small projects, is why Janet likes her job so much. The variety and somewhat unpredictability of having many different tasks ensures that she never has to be stuck at her desk doing just one thing for very long. Janet likes a challenge and enjoys the fact that she has a different agenda each day. “I like a challenge,” said Janet. “I want to get up and move and be productive.”

Janet understands the importance of public transportation systems because she used use MITS buses as her primary form of transportation. Because of this experience, Janet knows just how critical her job is, which is why Janet works so hard and is so efficient at performing her duties. Although Janet’s technical job title is that of a secretary, she does so much more than sit at a desk. She gets up, moves around, and really gets involved in the company. She does everything she can so the passengers can have a safe and reliable form of transportation. “Whatever they need me to do, I’m there to do it,” said Janet. 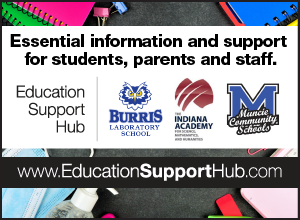