MITS (Muncie Indiana Transit System) transports many individuals daily around Muncie to their jobs. One of the organizations that MITS works with to help transport employees to their job is Erskine Green Training Institute (EGTI).   EGTI features ten to thirteen-week training programs in which instructors teach people with disabilities to work in the hotel, restaurant, and medical fields. During this process, the students not only learn how to work in the community but they also learn how to live independently. Although many students and their parents are nervous at the beginning, week by week that nervousness fades and each student grows in confidence. One of the big steps the students take on this journey to independence is mastering the public transport system around Muncie. 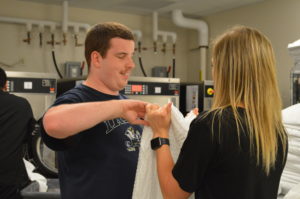 To the left is instructor Grace Clark assisting student Dilan Fish as he folds towels for a part of his training.

Because many of the students at EGTI do not have cars, their one way of traveling is through the public transit system and learning the MITS bus routes. This assignment can be a difficult one, especially if someone has never been in contact with the bus system before. The MITS drivers assist the students as they attempt to understand the bus schedule. The MITS employees do not simply drive the bus.  They make it a point to get to know and recognize the trainees and instructors of the EGTI program. They show such support by answering questions, instructing them on possible routes to destinations and simply engaging in conversation with the students.

If the students are able, they download the MITS Time app for their phone.  The instructors and trainees like the light-up map feature which shows each route of each bus in addition to the accurate arrival times. Both of these features make it much easier for the students to plan their trips around town. 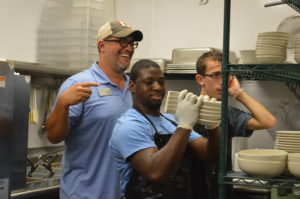 After the students have spent some time riding the bus, they eventually are tasked with creating a trip around town which includes two stops and two buses. Although this assignment may seem daunting at first, the process is made much easier through the help of the MITS time app, their support system and the reliability of the buses.

It is a big deal for the students when the students complete their “bus test” and master the MITS system. Before the program, they didn’t have a way to drive around the county, much less travel to a possible job.  But, after learning how to ride with MITS, they gain the ability to move and be involved in the community, as well as the opportunity to seek future employment anywhere there is public transportation.  MITS is proud to be associated with Erskine Green Training Institute.